We’ve officially welcomed the fall season around here and the end of our Benjamin Biggs quilt isn’t far away. Today’s block will keep you busy for quite a while though. It’s filled with flowers, stems and little leaves. 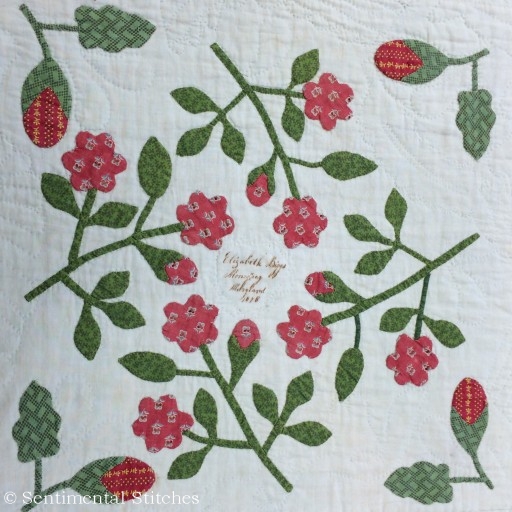 Isn’t this a pretty block!

Elizabeth , like Sarah Biggs, lived in District 5 of Frederick County Maryland. Born May 7, 1830, she was 18 years old when this block was completed. Her sisters Emma and Sarah also made blocks for the quilt. Her parents were Benjamin Biggs, Jr and Delilah Graff. We have two blocks signed with the Groff so it makes me wonder if Delilah’s name was actually Groff rather than Graff.
We talked a about the town of Monocacy with Block 8 and Block 16. The town of Monocacy is thought to be the first German settlement in Maryland. It sits between the Monocacy river and the mountains and was first settled between 1710 – 1712. There was a large Lutheran church there which celebrated it’s centennial in 1848 but I haven’t tried to research the old church rolls to see if I can find any of the names on the quilt. It was certainly the most important settlement of Germans in the State until the establishment of Frederick county in 1748 when Fredericktown became the county seat. Anyone who lived in Monocacy had their address swallowed up and changed to a Fredericktown address. The exact location of the original log church is not known. It is thought to have been built on the west side of the Monocacy river near where the Virginia road crossed the river.